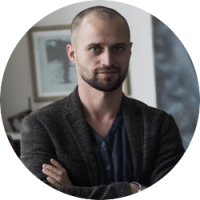 2008. - graduated from the Kharkov Academy of Design and Arts, Faculty of easel painting.

Member of the Youth Union of Artists

- participated in many national and international exhibitions since 2002.

Many paintings are in private collections in Ukraine and abroad.

“My paintings are about loneliness, about human fears, about mental peace and much more. Recently I came to a conclusion that my pictures are autobiographic, they disclose themes, problems, experiences, observations, which I already felt on myself. The paintings reflect my thoughts about the events that i have personally been confronted with, which I feel and experience. The last couple of year I particularly interested in social topics, the status of the soul and how that is affected by the thoughts and personal experiences of people. "

Since 2003, the city party and Ukrainian exhibitions:

2003 - "Fifth Exhibition of creative works of teachers, staff and students of higher academic institutions of Kharkov."

Konstantin are present in these categories:

All products from Konstantin